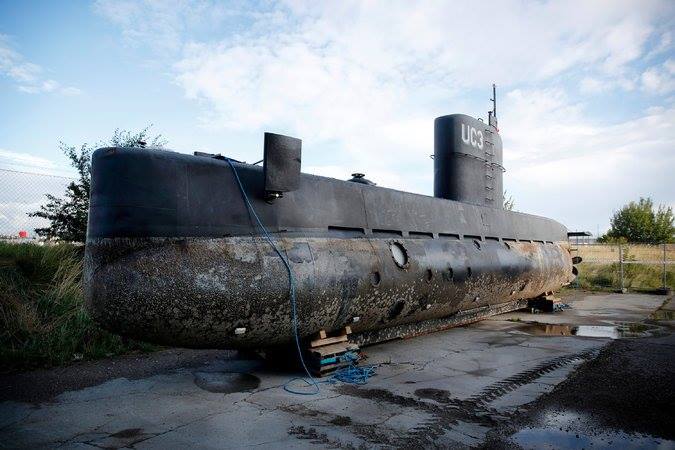 On the evening of Thursday 10th August, around 7 p.m., Kim Wall, 30, a freelance reporter, boarded the submarine UC3 Nautilus to interview its owner Peter Madsen, a danish inventor, in Refshaleøen, Copenhagen, Denmark.

A last picture of Kim Wall and Peter Madsen standing in the vessel’s tower was taken at 8.30 p.m. by a man on a cruise ship.

Kim Wall’s boyfriend reported her missing early on Friday 11 when she failed to return to harbour at the agreed time. After the report he authorities launched a search operation based in the port of Øresund. The submarine was spotted by the Drogden lighthouse in Koge Bay, a seaport south of the city, at 10:30 a.m., the UC3 Nautilus was on course towards the harbour.

Around 11 p.m. the sub suddenly sank and its owner was rescued by a private boat. The UC3 Nautilus came to rest at a depth of 7 metres (23 ft).

A witness, Kristian Isbak, told The Associated Press that he saw Peter Madsen, wearing his trademark military, standing in the conning tower moments before the sub sank and that “He then climbed down inside the submarine and there was then some kind of air flow coming up and the submarine started to sink, came up again and stayed in the tower until water came into it before swimming to a nearby boat as the submarine sank”. Kristian Isbak added: “There was no panic at all, the man was absolutely calm”.

Peter Madsen, upon his rescue from Køge Bay, said: “I was toying with various things on the submarine and then an error occurred. I’m fine. But I’m sorry because Nautilus has gone down. It took about 30 seconds for Nautilus to sink, and I couldn’t close any hatches or anything, but I guess that was pretty good, because I otherwise still would have been down there”.

Madsen alleges that the Nautilus sank because of an issue with the ballast tank and that he had no time to close any hatches to prevent the sub from filling with water.

After his rescue Peter Madsen said he dropped off Kim Wall at the mouth of the harbour about three and a half hours into their trip on Thursday night and that he was the only one on board when his sub sank.

Around the same time, Madsen sent a text to a friend saying that Kim Wall had left the sub and that the trip from Copenhagen to the island of Bornholm on the Nautilus that was scheduled for the following day had to be cancelled.

On August 12, Madsen claimed in closed court that after Kim Wall died accidentally on the sub after she was hit by a heavy hatch cover: “I didn’t see her die by any deliberate act; I saw her die of something completely different, saw her fall down”, and then I “buried her whole body at sea”. Madsen has also denied amputating her limbs and head.

Something to take notes about Madsen’s statements:

– In his first statement: “I was toying with various things on the submarine and then an error occurred. I’m fine. But I’m sorry because Nautilus has gone down. It took about 30 seconds for Nautilus to sink, and I couldn’t close any hatches or anything, but I guess that was pretty good, because I otherwise still would have been down there”, everything is just about him, Madsen didn’t mention Kim Wall, he didn’t say: “Thanks God she disembarked earlier!”, a distancing measure, a huge red flag.

– When asked, Peter Madsen claimed that Kim disembarked on an island about three and a half hours into their trip on Thursday night; he used the number three, three is the liar’s number. Number three is usually used by a deceptive person when he/she must choose a number and number 1 seems too small and  numbers 4 or 5 too large. Another red flag.

– Peter Madsen said: “I didn’t see her die by any deliberate act; I saw her die of something completely different, saw her fall down”:

1) this is not a reliable denial;

2) he doesn’t refer to the homicide as a “killing” but as a “deliberate act”, a way to minimize; minimization is a distancing measure, it’s a common strategy used by guilty people to avoid of dealing with negative emotions by reducing the importance and impact of events that give rise to those emotions (feeling of guilt);

3) he represents himself as a spectator, a way to distance himself from the facts.

On August 12, a cargo ship, Vina, raised the Nautilus from a depth of 22 feet and brought it back to the Copenhagen port where it was emptied of water overnight to allow access for homicide investigators.

On August 14, the police stated that Madsen, after the homicide of Kim Wall, scuttled the UC3 Nautilus to conceal or destroy evidence. Inside the sub they found Mrs Wall’s blood, hair, underwear, tights and panties.

On August 21, the headless and dismembered torso of a woman washed up on a beach in the south-west of Amager.

On September 5, Madsen testified before a court that Wall was “accidentally” killed when he held the submarine’s heavy hatch and lost his footing, thereby causing the 70kg-hatch to shut and fatally hit Wall in the process. Madsen claimed to have been in a state of “suicidal psychosis” when he disposed of the body, arguing he was not thinking rationally at the time. He denies having mutilated Wall’s body. The 46-year-old said he then tried to bury her at sea and intended to commit suicide, sinking his submarine.

On october 6, Kim Wall’s head and legs were found by navy divers, assisting cops, near where her torso was found in August. Her head had been placed in a plastic bag weighed down with heavy pieces of metal, in another bag investigators found some of her clothes, her shoes, a knife and metal tools.

After Kim Wall’s torso was found on shores near Copenhagen, coroners   asserted that her head, arms and legs had been removed deliberately and that she was stabbed several times in her chest and in the lower abdomen area around the time of death or shortly afterwards. Post mortem didn’t show any fractures to Wall’s skull to sustain Madsen’s story that Wall died after being accidentally hit by a heavy hatch in the submarine’s tower. However, no definite cause of death has yet been ascertained.

Thomas Djursing, Madsen’s biographer, has revealed to the press that the UC3 Nautilus owner “often ends up in conflicts and has a lot of enemies” and that in “the past few years, he has been driven by a kind of vengeance. To show those he has worked with in the past, but who has since become his adversaries, that he can beat them”.

Djursing added that “Madsen temper can flare unexpectedly” and that he doesn’t “know a journalist who has not been in conflict with him”.

Djursing wrote in his book “Rocket Madsen”, that Madsen “describes himself as a nerd with few friends” who grew up with his elderly father after his parents’ separation. A Nerd is an unstylish, unattractive, or socially inept person; slavishly devoted to one subject.

Locals describe Madsen as a maverick and a Gyro Gearloose with high ambitions and low social skills.

Madsen published a message on his association’s website two years ago: “A curse lies over Nautilus. That curse is me. There will not be calm around Nautilus as long as I exist”.

IN July 2014, Madsen established a Space Lab in Copenhagen, a laboratory where he researched, developed, and built rockets based on H2O2/polyurethane hybrid engines. In preparation was a rocket, Flight Alpha, which was expected to reach an altitude of 14 km.

Something that shouldn’t surprise Djursing, Madsen’s biographer, who revealed that the inventor was involved in sexual experimenting in fetish groups despite living with a partner.

Peter Madsen’s choise to wear militar dress in Court reflected his fragility, his lack of self-esteem.

Madsen didn’t dismembered Wall’s body to cover his crime but just to act out his violent fantasies to obtain a sexual gratification.

On the submarine investigators found Kim Wall’s underwear, tights and panties, Peter Madsen, who planned Kim Wall’s homicide, kept these items as souvenirs, a victim’s leftover allow a Lust Murderer to access to his memories, to relive the crime he committed.

The murder of Kim Wall was a “motiveless homicide”, she was killed by a sexually incompetent man, an Anger-Excitation Sexual Murderer, who stabbed her in the genital areas and dismembered her body just to obtain a sexual satisfaction.